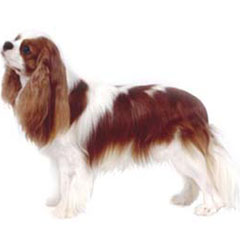 As far back as the 17th century, small spaniels not quite big enough to go out hunting with the British landowners stayed home to comfort and cuddle with the ladies at court. A favorite of King Charles (after whom they are named), the Cavalier King Charles Spaniel was the most fashionable of companion dogs in England until the 1800s, when Pugs came into fashion. To keep up with the trends, some people crossed small spaniels with Pugs until most had flat faces, resulting in the English Toy Spaniel we know today. The Cavalier, with his longer nose, seemed hopelessly old-fashioned and few existed. In the mid-1920s, an American named Roswell Eldridge wanted to find dogs that looked like those pictured in the old paintings, and offered a prize at England's largest dog show, Crufts, for a toy spaniel with the Renaissance look. Nobody came forward because breeders had been trying for years to eliminate the long noses, but finally in 1927, an old-style spaniel won the contest…just months after Eldridge's death. In his honor, and in order to recreate the dog of old, fanciers got together and revived the breed. The Cavalier came to America in 1952 and soon became a much-beloved lap pet. Today the Cavalier is the 27th most popular dog breed.

You might wonder if your Cavalier has secretly been to charm school. Could a dogbeany sweeter? The ultimately adaptable Cavalier can live anywhere and do almost anything with your loving guidance. They look to their people for direction, and while they do have a natural hunting instinct—they are related to the larger hunting spaniels, after all—and might occasionally chase small animals or cats, Cavaliers generally get along with just about anybody, human or animal. Just be sure to keep them on a leash or in a fenced yard so they don't dash across the street to greet the neighbors or chase a pesky squirrel. Wonderful travelers, good playmates for school-aged kids, and eternal optimists, Cavaliers have a cheerful attitude and a special instinct about people. They know just when to snuggle up, back off, settle down, or get playful. Just don't leave them alone for long—above all, the Cavalier is meant to be a companion.

A toy version of larger spaniels like Cocker Spaniels and English Springer Spaniels, the Cavalier has big, brown eyes and long, silky hair that hangs in feathers on his ears, tail, underside and legs. Cavaliers come in four different color patterns: Blenheim (chestnut-red and white), tricolor (jet-black, rich tan, and white), ruby (rich solid red), and black and tan. They move with grace and energy but also have a noble bearing, elegance, and a sweet, gentle spaniel expression. There is no such thing as a “Teacup” or “Miniature” Cavalier King Charles Spaniel. The Cavalier should be 12 to 13 inches and between 13 and 18 pounds. Dogs smaller than this aren't correct for the breed and can be more prone to injury and health problems.

Cavaliers want to please you, so training them is easy, as long as they understand what you want. A basic obedience class or gentle, reward-based home training will quickly teach the Cavalier basic cues like “sit” and “down,” plus fun tricks or even more advanced dog sports like agility (an obstacle course race) or competitive obedience. Reward good behavior and you'll see fast results, but don't yell at the gentle Cavalier – he only wants to know what pleases you. Housetraining the Cavalier is easier than housetraining some other toy breeds. Take the dog out on a regular schedule and keep him confined to a comfy kennel for short periods when you can't supervise, and your Cavalier will quickly learn what you want.

Even though the Cavalier has a feathery coat, it is easy to groom. Just brush through the coat a few times every week and bathe about every 2 months with a shampoo and creme rinse made for dogs. Blow the coat dry with a blow dryer set to “low” or “cool” for the silkiest, shiniest coat. Trim just the tips off the Cavalier's nails and clean his ears every week. Brush the dog's teeth every day or two, and you're done. Easy!

Like many small dogs, Cavaliers can suffer from luxating patellas (kneecaps that slip out of place). They also sometimes have eye problems like cataracts, hip dysplasia (a degenerative hip disease), and a heart valve defect called mitral valve disease (MVD). Ask your breeder about these issues.

King Charles II often played with his dogs instead of working. Charlotte York's Cavalier, Elizabeth Taylor in "Sex and the City"

© Copyright 2014 LifeLearn Inc. Used and/or modified with permission under license.

Our veterinarians are dedicated to providing the best possible healthcare by getting to know you and your pet.

Take a look at our store today we have many different options for you to choose from dog products to supplements.